Are you hosting a Bridal Shower? Grab free printable Bridal Shower Games such as “Name the Spice,” “Purse Hunt,” and “Bridal Scattergories,” for a simple and fun party.

Last Thursday I shared the menu that we used for my sister-in-law’s Vintage Bridal Shower. Food and decorations are typically welcome at any Bridal Shower, but I know some folks have strong opinions about NOT playing any silly games.

One side of me totally understands that point of view — because the games can be silly, for sure. But then the other side of me, that loves to win any event that is winnable, thrives off of a fun Bridal Shower Game…

Not that I am competitive.

Still, when I plan any type of party {Bridal Showers included}, I try to come up with games that aren’t too silly and that feed everyone’s competitive spirit.

Most Brides-to-Be aren’t expert chefs even though they are entering a new world of Cooking for Two. When I got married I didn’t know how to make scrambled eggs {my hubby would argue that I still don’t since I refer to my cookbook for the milk to egg ratio — but, hey, I like my eggs with the right amount of fluffiness and that recipe does the trick}. This simple game won’t teach you about cooking scrambled eggs, but you’ll learn a bit about using herbs and spices. 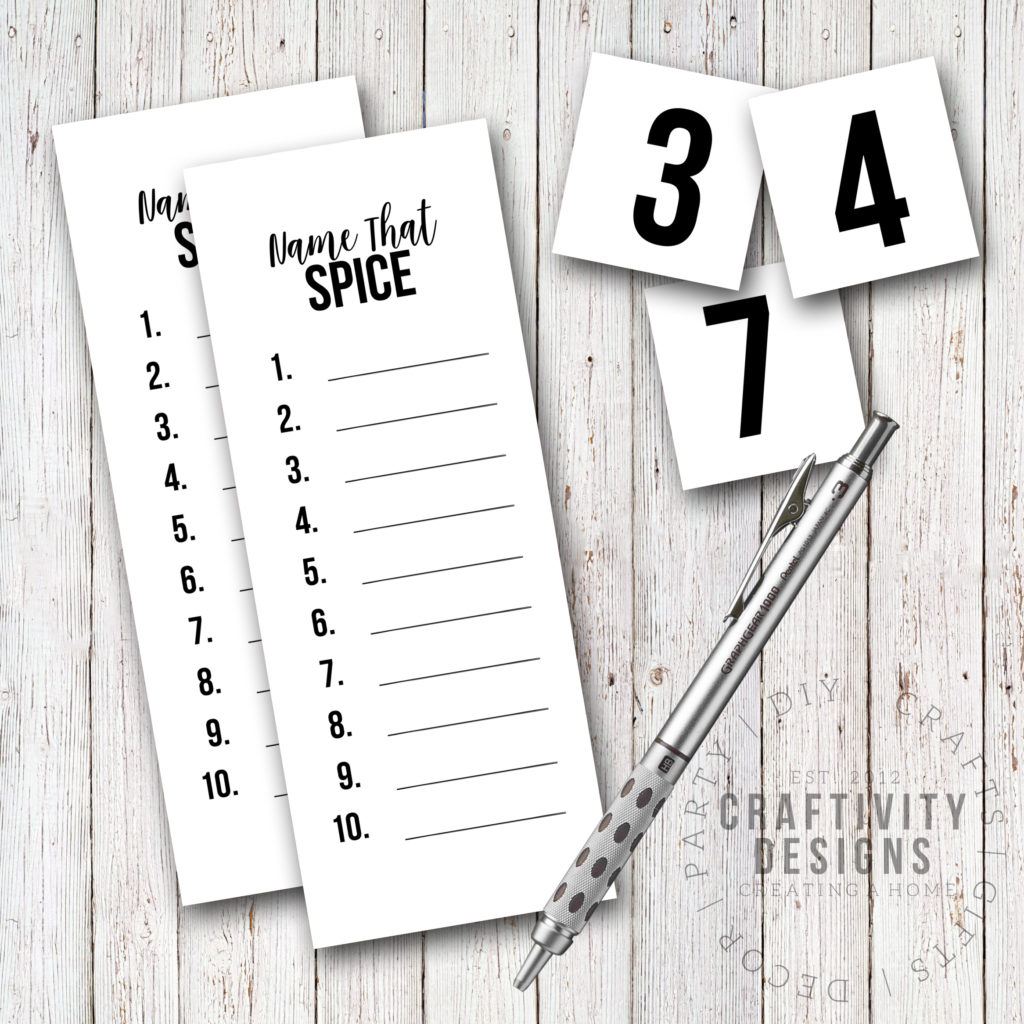 Choose some pretty bowls and fill them with various dried spices and herbs. I printed off a sheet of numbers, cut it into squares and set one in each bowl. Each guest received a piece of paper numbered 1-10. We placed all of the bowls on a decorative tray then let the guests LOOK and SMELL, but they couldn’t taste, in order to guess each herb. 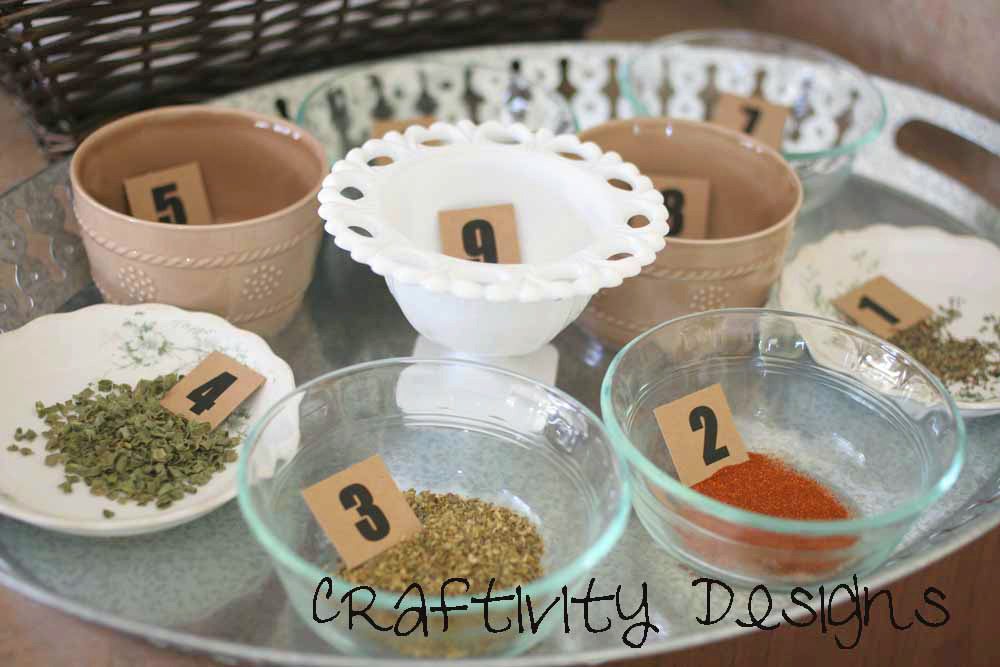 We had a culinary student in our crowd, and even she didn’t guess all ten. Still, I’d be prepared with a tie-breaker in case several guests get them all correct.

Which herbs should be included? It’s up to you! I chose a mix of green herbs that were look-alikes, such as:

Along with a mix of darker seasonings, such as:

Including several look-alike seasonings will make it more difficult for the party guests to distinguish between each type of herb or seasonings. 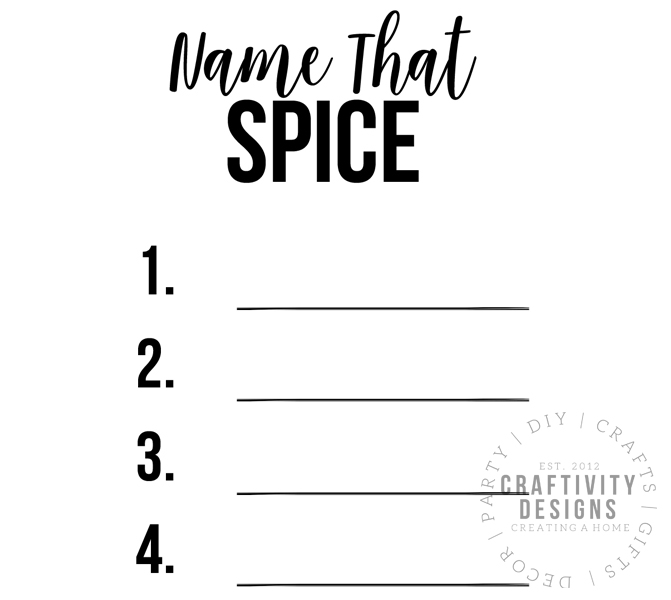 Would you like to download the free printable? Enter your email below, and the link to the printable will appear. {note: If you are already subscribed, you will still need to enter your email; but you will not be subscribed twice.}

One of my all-time favorite games is Scattergories. If you’re not familiar with the game, it works like this:

Step 1: Roll an alphabet die to choose a letter {let’s say the letter is “C”}
Step 2: Answer each “question” with an item that corresponds to that letter

for example: Question = A Type of Drink  // Answer = Coca Cola

in other words: if your answer was just “Coke”, you’d only get 1 point 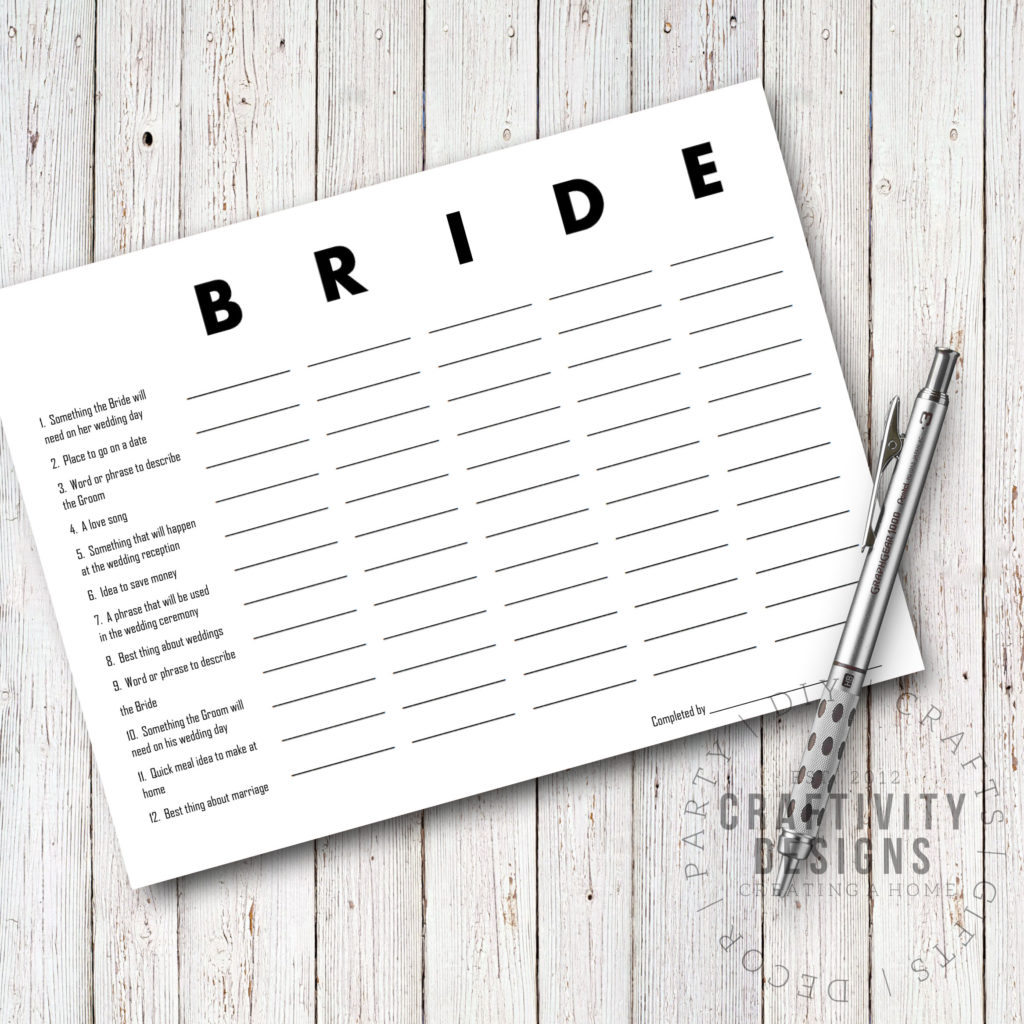 There are more rules, which you can check out here if you are interested. But, for a shower, I didn’t get too nit-picky with the specifics. After all, we only had a short amount of time to play the game anyway.

In Bridal Scattergories, the letters are chosen for you {B-R-I-D-E} instead of rolling a die. I gave the group 5 minutes, but they begged for more time… and I’m a sucker… so they played for 10 minutes.

Plus, this game can make for an entertaining read. To make it a keepsake for the Bride, have each guest sign the “Completed by” spot at the bottom of the Scattergories Printable. 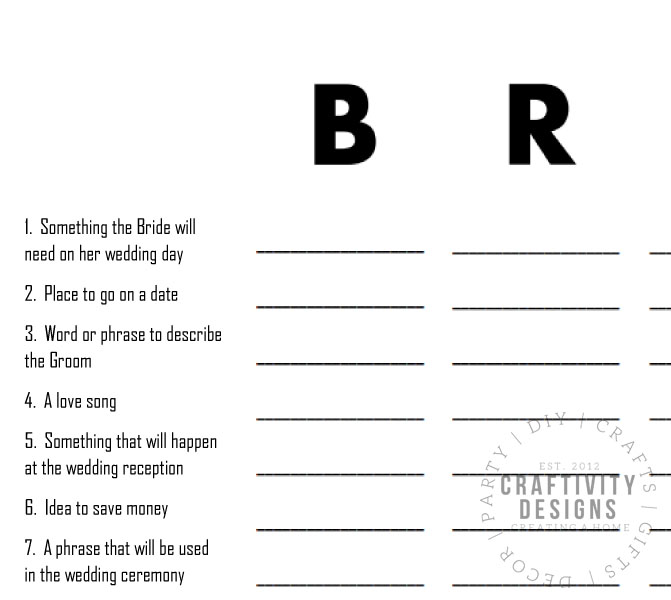 Would you like to download the free printable? Enter your email below, and the link to the printable will appear. {note: If you are already subscribed, you will still need to enter your email; but you will not be subscribed twice.}